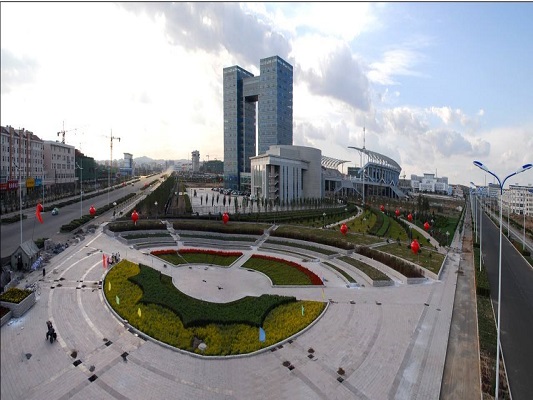 IDCNOVA feature: Ulanqab,located in the Inner Mongolia of Northern China and abundant in power and quality environment,is emerging to become the cloud hub in the north of China,contrasting Guizhou in the south.

Upon its favorable policies,abundant and cheap power and land resources,quality air,cool climate as well as convenient transportation and cables to Beijing,Ulanqab is developing rapidly in recent years via dynamics from digital economy consisting of big data and cloud computing.The total investment of data centers in Ulanqab has reached by 24.3 billion yuan,holding 1 million servers.Tech giants including Huawei,Alibaba,Apple,UCloud and so on all have launched projects here.

Recently,IDCNOVA launched a tour to Ulanqab on local data centers together with representatives from enterprises like Qinhuai,Kingsoft,HGC,etc.What’s the real landscape of Ulanqab data center industry?How is it going for those data center projects?Let’s reveal through a zero-distance tour.

Since the starting of construction in 2017,the first stage of Huawei North China Cloud Data Center has been completed.With total investment of 1.5 billion yuan,this site is designed to install 8,064 standard server cabinets and 100,000 servers,and 20,000 servers will be available for operation and overall deployment completion within 3 years.

According to person in charge from Huawei Cloud,as the joint crucial project in Ulanqab,Huawei thinks highly of the dynamic momentum of data center industry here,thus they make the decision to construct a data center site here.

It’s reported that the Alibaba Ulanqab Data Center will hold 300,000 servers with over 10 billion of investment after the completion.Alibaba will make full use of this site as its big data platform in terms of storage,treatment,transmission and so on.

Why Alibaba chose Ulanqab?Once a poverty-stricken area,Ulanqab is trying to alter the poor and less-developed state by science and technology and grabbing the opportunity in particular when in 2016,Inner Mongolia was approved to be the comprehensive pilot zone on overall-planning development of big data infrastructure.

Geographically,located in the mid-temperature zone,the average temperature of Ulanqab is 4.3℃,which is saving power and advantageous for data center cooling.Located in the middle of Inner Mongolia Autonomous Region,Ulanqab is prestigious for the quality air without heavy industry,which is for the high tech industries like big data,cloud computing and others.

Alibaba to construct a 6.2b data center in East China’s Zhejiang Province

During the groundbreaking ceremony of Apple Ulanqab Data Center,we got information that this site will be operated under 100%recyclable energy.As the first data center of Apple in North China and second one in China after its project in Guizhou.Apple already registered an entity company in Ulanqab for the project construction and operation.This data center is scheduled to be available in 2020 and would provide Chinese users with iCloud services.

Through the on-site tour,the advantages of Ulanqab is vividly on display in terms of transportation,favorable electricity,2 high-capacity cables connecting Beijing and policies and regulations,which all attract more and more data center enterprises come and launch sites in Ulanqab.Apple already registered an entity company in Ulanqab for the project construction and operation.This data center is scheduled to be available in 2020 and would provide Chinese users with iCloud services.