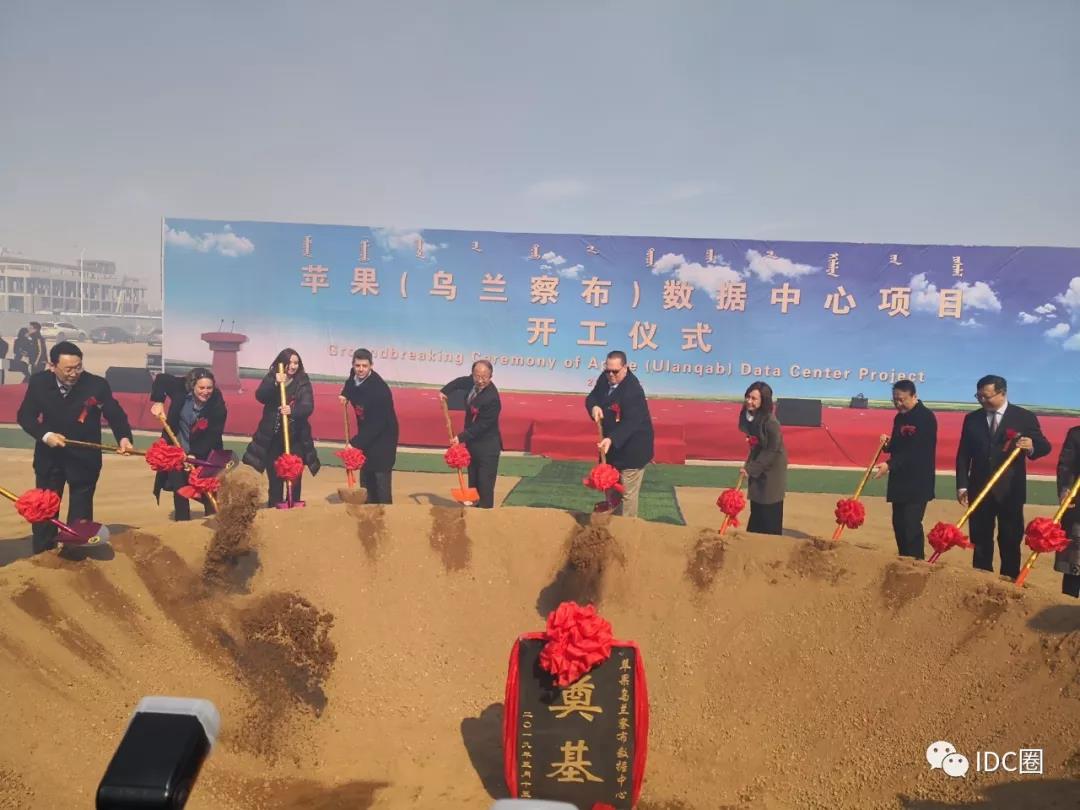 IDCNOVA news: Apple(Ulanqab)data center was launched recently during the groundbreaking ceremony in China’s Inner Mongolia Autonomous Region.This is the first one in Northern China and second one in China after that in Guizhou.

Apple already registered an entity company in Ulanqab for the project construction and operation.This data center is scheduled to be available in 2020 and would provide Chinese users with iCloud services.

Once a traditional agricultural area,in recent years,Ulanqab is committed to forging big data industry upon its advantages of favorable climate and cheap power,thus tech giants like Apple,Huawei,Alibaba and others have all landed sites here.

With echoing "buzz" sound, the indicator lights are glittering fast and servers running under high speed are storing, loading and transmitting mass data, that is a scenario captured by a journalist visting the Huawei Cloud data center in Ulanqab.

Zhang Hualong,the project manager said,as the tier I node in China of Huawei cloud service,over 10,0000 servers had been available and additional 300,000 servers would be adopted scheduled this year for stage II,stage III and IV are under planning now.

At present,Ulanqab is capable for nearly 1 million servers.Since 2017,Alibaba,Ucloud,Asiainfo and others launched their projects here.

On the basis of data center development,the big data application industry is growing up too.In the brand new office building of Ulanqab STDR Info Tech,vigorous employees are dealing with geographic information on urban blocks and roads and prepare for the navigation software development and update.

Once a poverty-stricken area,there was a saying to describe the state before in Ulanqab“neither any grassland nor any treasure underground”,thus as many as 700,000 farmers had to move away for a living during the peak period.

In 2016,Inner Mongolia was approved to be the comprehensive pilot zone on overall-planning development of big data infrastructure.Grabbing this opportunity,Ulanqab is trying to alter the poor and less-developed state by science and technology,paying attention to cultivate and support big data and cloud computing as the key.

Since 2016,Ulanqab is holding the China Entrepreneurship and Innovation Expo(CEIE).During CEIE 2018,1000 exhibits of 3D printer,AR wind shield,big data application system and many others on display attracted spotlight,academician,experts and tech giant tycoons gathered to deliver speech,seminar.

Appealed by CEIE and realized the potential of Ulanqab,Hu Kaiqiang left Bejing for hometown in 2017 and joined a big data call center in Ulanqab,and he promoted very soon as a business director.

Ulanqab planned a big data industrial park covering 13 square kilometers,all the companies included are available to favorable policies referring to premises,tax and so on.

During the annual data center award 2017-2018 launched by the China Data Center Alliance,Ulanqab was chosen as one the most suitable city/region for data center investment.